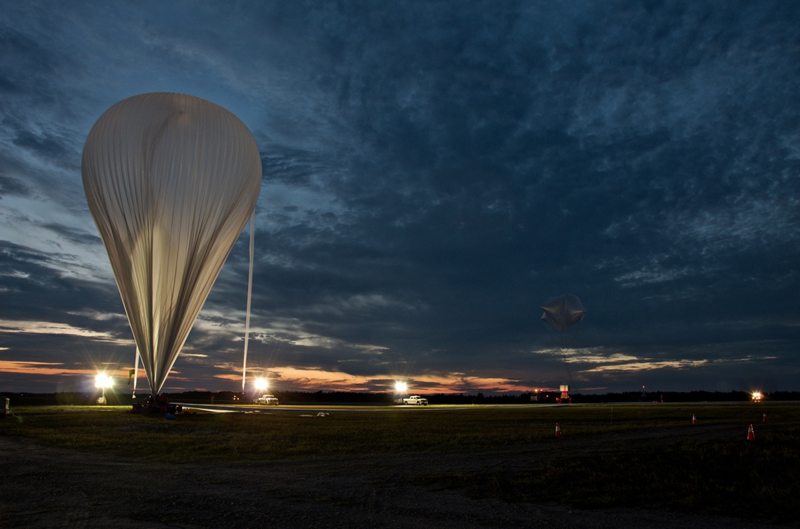 EUSO-Balloon is a balloon-borne experiment performed in collaboration with the French Space Agency CNES. It was equipped with one full original JEM-EUSO PDM (photon detection module with 2304 pixels) and with an optical system made of two Fresnel lenses, with a side of 1 meter covering a field of view of 12 degrees. In addition to the main instrument, a stand-alone and waterproof infrared camera was on board.

On the moonless night of August 25, 2014, the instrument, installed on board a Gondola, has been brought by a stratospheric balloon to a float altitude of 38 km for more than 5 hours before descending to ground. The flight has been performed by the balloon division of the French Space Agency CNES from Timmins Balloon base (Ontario, Canada) [ref.1]. The payload electronics draws from the experience of several balloon campaigns to study the antiparticle component in cosmic rays with a magnetic spectrometer in the year 1989-1998 (TS93, Caprice-94, 98…).

All the subsystems of EUSO-Balloon behaved in flight according to their nominal requirements, performing full scale end-to-end test of most of the key technologies and instrumentation of JEM-EUSO detectors.
A detailed and precise measurement of the UV background in different atmospheric and ground conditions was achieved. The instrument proved even the capability of detecting Extensive Air Showers by observing calibrated UV–led and Xe flashers and tracks of a laser shots emitted from a NASA-funded helicopter, which flew under the balloon for about two hours.

In addition,  the UV emissions from northern Canada were sampled for the first time with a temporal resolution from 2.5ms to 1 s and a spatial resolution of 1km.