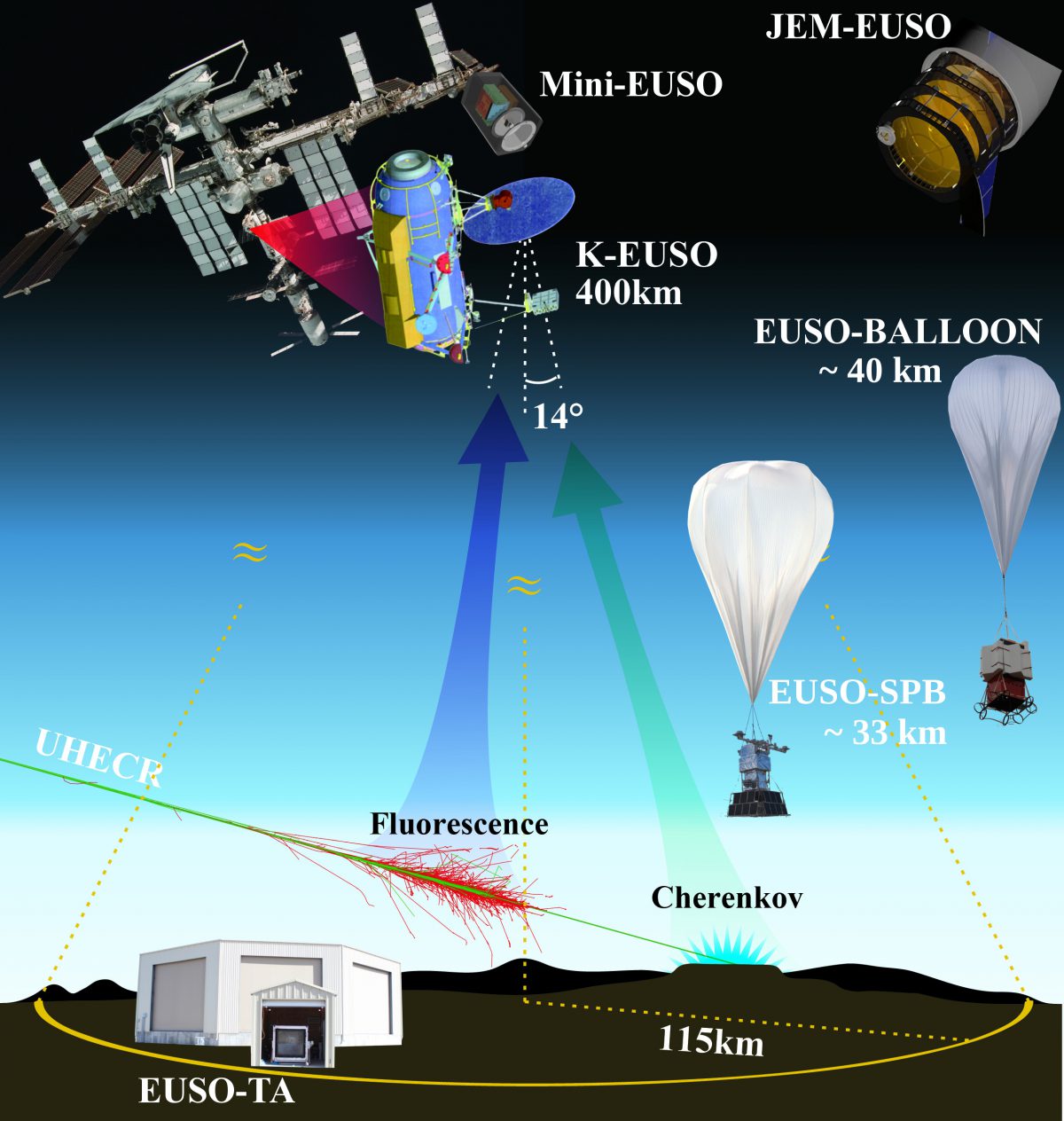 Since their discovery in 1912, Cosmic Rays (CR) have been crucial to the study of new physics. Begining with the pioneering studies of Prof. Nishina, leading – among other things – to the discovery of the muon, several new particles and unexpected phenomena such as neutrino oscillations have been discovered in CRs. Currently, Ultra-high-energy cosmic rays (UHECR), unidentified particles with energy above 5×1019 eV constitute one of the greatest puzzles in physics, due to their unknown nature, origin and energy more than three orders of magnitude higher than achievable at the LHC accelerator. Research in UHECR has the potential for breakthrough results both in fundamental physics (e.g. dark matter search), astrophysics (black holes, shock acceleration, strange quark matter) and cosmology (top-down production scenarios, topological defects).

Researching UHECR from space can answer these questions using the volume of the Earth’s atmosphere as a detector potentially several orders of magnitude larger than what is achievable on ground. Since these observations would be directed at the Earth, this field has strong interdisciplinary connections with Earth, atmospheric and life sciences. Furthermore the technology developed has a several practical applications such as the development of detectors to mitigate the effects of the Fukushima accident.

Historically, RIKEN has always been at the forefront of the study of CRs both charged and in the gamma/X ray band. In this context, the EUSO team has been established in 2010 to coordinate and lead the JEM-EUSO international collaboration (16 countries, 300 researchers), and develop its unique in-house capabilities of lens and detector construction in order to construct the first space-borne UHECR detector.

Since 2010 we have built a ground Telescope (EUSO-TA), performed two stratospheric balloon flights (EUSO-Balloon and EUSO-SPB1) and are close to launching our first spaceborne detector (Mini-EUSO, on the International Space Station. This will be followed by a second super-pressure balloon flight in 2022 and the full K-EUSO mission in FY 2023.

JEM-EUSO is a two-ton refractor telescope using Fresnel lenses to focus the UV light from cosmic ray showers in the atmosphere onto a 300k channel focal surface, with a 2.5 microsecond sampling rate [ref.1, ref.2]. The instrument intends to address basic problems of fundamental physics and high energy astrophysics by investigating the nature and origin of the Ultra-High Energy Cosmic Rays (UHECRs). This is an evolved and upgraded design of the EUSO telescope, which underwent phase A study in ESA (European Space Agency) and was put on hold after the Columbia Shuttle accident. The proposed installation on the Japanese External Module (JEM) and the introduction of novel technologies resulted in an effective area more than one order of magnitude larger than that of ground detectors. The feasibility and accommodation of the JEM-EUSO mission was studied jointly by JAXA and RIKEN in 2009 within the framework of the first call for the utilization of KIBO. At the time, JEM-EUSO was recognized as a promising mission candidate for the third phase of utilization of the JEM module.

Therefore, in October 2010 the EUSO team was created at RIKEN with the objective to promote the experiment. On an international level RIKEN has functioned as a hub expanding the collaboration to more institutes and countries. On a national level the Japanese group has grown to include Konan University, Saitama University, IPMU, and the ICRR of Tokyo University.

In addition, at RIKEN we have developed and refined several novel technologies essential for the instrument. Amongst them are, a) Super-lightweight, large (>2.5 m) plastic Fresnel lenses (in collaboration with Ohmori materials fabrication lab), b) high performance multi-anode photo multipliers (in conjunction with Hamamatsu Photonics), and c) space-qualified lasers (together with Wada advanced Photonics Technology group) to probe the atmosphere crossed by the cosmic ray showers.

In the meanwhile, the science value and feasibility of the mission was independently evaluated by the various national and international agencies, such as NASA, which has included JEM-EUSO in the Roadmap for astrophysics from space and ESA, where it was positively reviewed by the European Science Foundation (ESF), the Astronomy Working Group (AWG), and the Physical Science Working Group (PSWG). Furthermore, the Science council of Japan has included JEM-EUSO in the master plan for future science projects.

Unfortunately, JAXA stated in the end of 2013 that it was no longer willing or capable to be the leading agency for this mission, citing size and cost of the instrument as constraining factors to the decision. The international collaboration thus decided to follow a Russia proposal to join the KLYPVE experiment and use the Fresnel lenses and Multi-anode photomultiplier detectors to expand tenfold the observational capabilities: from a pathfinder to a larger observatory, with an exposure equivalent to four Auger detectors: K-EUSO.

In parallel, a number of precursor projects on ground, balloon, and in space have been developed both as standalone detectors and to improve the performance of the K-EUSO telescope: 2013 EUSO-TA, 2014 EUSO-Balloon, 2017 EUSO-SPB, 2019 Mini-EUSO.

The origin and nature of UHECR, particles with energy above 5.7×1019 eV is still unknown and constitutes one of the great unsolved mysteries in physics. UHECR are thought to be coming from extragalactic distances (~ 100 Mpc). At this energy they are less bent by the galactic and intergalactic magnetic fields, thus raising hopes for opening “charged particle astronomy” via direct identification through angular association with known astrophysical sources.

The study of UHECR probes the highest energies phenomena in the universe and as such allows us to address several still unresolved cosmology and fundamental physics topics. UHECRs have been proposed as candidates of heavy dark matter, could provide an answer to the matter/antimatter asymmetry in the Universe, test Lorentz invariance and the presence of topological effects in Big Bang cosmology through top-down production phenomena. On an astrophysical scale they provide information on acceleration and propagation in Active Galactic Nuclei and in intergalactic space. Data from ground-based observatories, Telescope Array in the Northern hemisphere and Auger in the Southern hemisphere have confirmed the presence of a cutoff (GZK) at energies greater than E ~ 5.7×1019 eV, due to the interactions of UHECR particles with Cosmic Microwave Background photons. This limits to 100 Mpc the astronomical horizon beyond which UHE cosmic ray sources cannot contribute significantly to the flux measured on Earth. Telescope Array has shown the presence of intermediate scale anisotropy with an excess of particles above E ≥ 5.7×1019eV . Auger has reported an anisotropy and possible correlation between events with E ≥ 5.7×1019eV and the distribution of nearby galaxies, although the correlation is weaker in recent analysis. In the Northern Galactic hemisphere, the uncertainties and difficulties in pinpointing one or more astronomical sources are due to the low cosmic ray flux (above E ~ 5.7×1019 eV it is on the order of 1 particle/km2/sr/century).Overcoming this challenge will requires a joint approach incorporating both the existing ground based telescopes and the development of a new generation of space-borne detectors, the latter being complementary to those on ground, since they offer complete and uniform coverage of the celestial sphere and have the potential for exposures larger by several orders of magnitude [ref.3].

Strange Quark Matter (SQM) is believed to be a bound and stable form of quark matter consisting of up, down and strange quarks [ref.4]. They are also referred to as “Nuclearites” or “Strangelets”, and are one Dark Matter (DM) candidate. Nuclearites can be detected as they reenter the atmosphere and can be distinguished from meteors by their longer burn (due to the higher mass/area ratio) and higher velocity (about 100 km/s since they come from interstellar space, whereas meteors come from the solar system). The EUSO detectors, including EUSO-SPB and Mini-EUSO can detect them as slow and bright (compared to UHECR) events as they interact in the atmosphere. EUSO-SPB will produce the first results of searches for SQM, to be expanded by Mini-EUSO and K-EUSO on board the International Space Station.

The detection of SQM would provide proof of the existence of a new, fundamental state of matter and change the current theories of nuclear matter and of the astrophysics of small compact objects such as neutron stars and hypothesized quark stars.

In case of no detection, with one year of data we would place an upper limit three orders of magnitude more stringent than current ones.

With MINI-EUSO and K-EUSO we will also realize and make public the first UV (300 – 400 nm) night map of the Earth, of relevance not only for the UHECR community but also for biological and environmental sciences. The UV band has never previously been studied at night in high resolution due to the fact that this measurement requires a high photon detection efficiency and a high quality optical system. Current data, from the Russian Tatiana and TUS satellites [ref.5], has a spatial resolution of less than 100 km. In case of EUSO-SPB the spatial resolution would be 220m and the sampling speed would be 2.5 microseconds. This will also allow for a comparative study between the UV background from various surface conditions (mountainous, desert, snow, lakes, cities) would allow to quantify more accurately the respective contribution of anthropic and biologic sources in the 300 – 400 nm frequency band.

Using this UV data It will also be possible to study the large-scale presence and evolution of the phenomenon of bioluminescence produced by algae, plankton, and other such organisms in order to gain information on oceanic pollution. Several effects, such as the so-called ‘white sea’ phenomenon have been observed in the visible range. Similar studies will be carried out by studying land vegetation in the UV band.