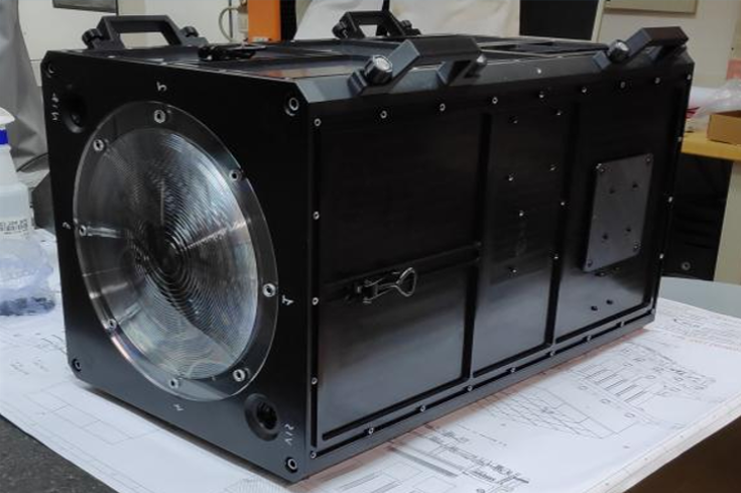 The Mini-EUSO (Multiwavelength Imaging New Instrument for the Extreme Universe Space Observatory), telescope is designed to perform observations of the UV light emission from Earth. It will be located in front of the UV transparent window in the Zvezda Russian module in the ISS, looking at our planet in nadir mode.

The Mini-EUSO instrument (37 * 37 * 62 cm3) comprises a telescope with a large (40 degrees) field of view,  based on an optical system which employs two Fresnel lenses (25 cm of diameter) for increased light collection. The UV light is then focused onto a 2304-pixel multi-anode photomultiplier focal surface (Photo-Detector-Module or PDM) similar to those flown in EUSO-Balloon, EUSO-SPB1  and EUSO-TA. Observations are complemented in the visible and Near Infrared range by two ancillary cameras and a number of UV sensors.

The main Mini-EUSO objectives are the study of atmospheric phenomena, like Transient Luminous Events (TLEs), meteors and meteoroides, the search for Strange Quark Matter (SQM) and the detection of some cosmic ray showers. Furthermore, Mini-EUSO could represent the first step in a roadmap of potential debris removal via laser ablation.

With Mini-EUSO – for the first time – create a dynamic map of nocturnal emissions of ultraviolet in the earth. These measurements are completed by a Near Infrared and a visible camera.

With this detector we can – for the first time – create a dynamic map of nocturnal emissions of ultraviolet in the Earth’s atmosphere, studying phenomena of terrestrial and astrophysical origin.

In detail, we can study several transient phenomena such as: a) marine bioluminescence and of the ‘milky sea’ phenomenon, generated by plankton, b) detection and study of meteorite, c) Search for quark strange matter. This hypothetical new state of matter could exist in   quarks stars or at the center of neutron stars and reach the Earth in the form of interstellar meteorites. Due to their high density, these fragments of nuclear strange matter would appear as interstellar (220 km/s) meteorites that burn for a long time in the atmosphere and with spectral emissions different from the classical meteorites d) Search for Ultra-high-energy cosmic rays.